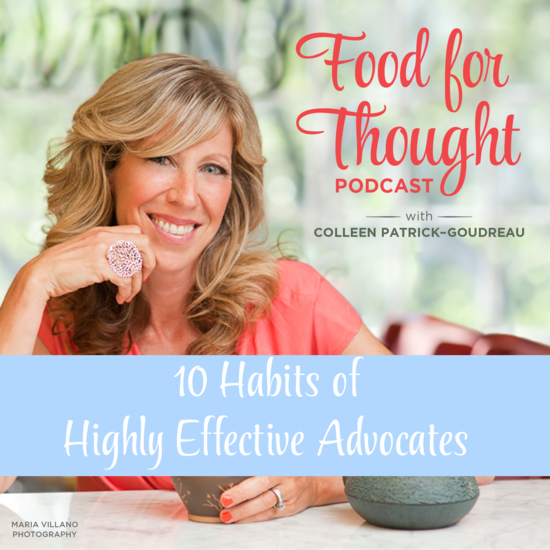 As an advocate for animals and compassionate living for over 25 years, you can imagine I’ve made mistakes, I’ve learned a bit, and I’ve thought a lot about what is effective — and what is not. And so I give you 10 Habits of Highly Effective Advocates. Take a listen by clicking the play button below or by subscribing to the RSS feed or listening through iTunes, Stitcher, or Soundcloud.

And enjoy some lil’ shareables, if you’re so inclined to share:

*When you think being vegan is the end goal — the badge, the destination, you get hung up on trying to be perfect or achieving a state of purity, and you forget what being vegan is all about.

*Being vegan is the means to the goal and that goal is unconditional compassion and optimal wellness.

*Highly Effective Advocates understand that perfection is the enemy of the good.

*The problems we face in our world are not because we have so much compassion we don’t know what to do with it. The problems are because people aren’t living according to their own values of compassion and kindness.

*We know we’re no better than anyone else for being vegan; we’re just better than who we used to be.

*I didn’t stop eating meat because I stopped liking the taste; I stopped eating it because I realized it was made of animals who were suffering.”

*Compassion isn’t compassion unless it is felt for everyone — the guilty and the non-guilty, the kind and the unkind, the good and the evil.

*Authentic compassion means having compassion even for those who do are not compassionate.

*Having a clear intention about your goal and making that goal about truth rather than outcome will make you a successful, effective advocate 100% of the time.

*May our daily choices be a reflection of our deepest values and may we use our voices to speak for those who need us most, those who have no voice.

Listen to this Episode

Finding common ground with someone you disagree wi

Reporting Live from Italy!. Traveling to Italy in