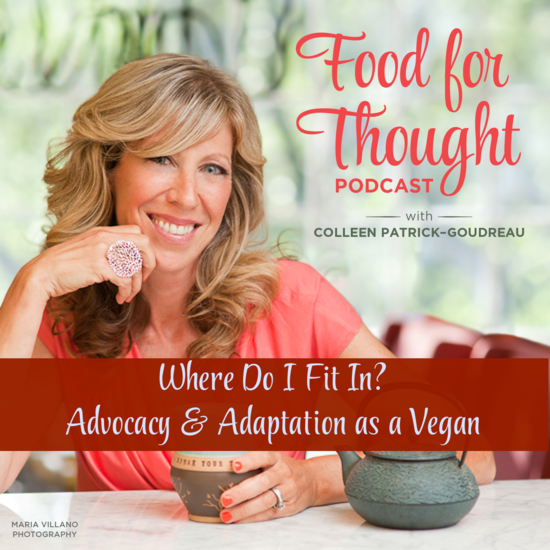 Advocacy and Adaptation: Fitting In and Living Joyfully in a Non-Vegan World

Having experienced all these benefits of getting meat, dairy, and eggs out of our lives and having found our own voice, it’s natural to next ask “Where do I fit into this whole thing?” “How can I help?” “What skills do I have that I can use to be part of the solution?” What’s my contribution?” Finally, we can relax into this compassionate and healthy way of living and adapt fully and joyfully into a non-vegan world. This episode wraps up our 10 Stages of What Happens When you Stop Eating Animals.

Listen by subscribing to the RSS feed or listening through iTunes, Stitcher, or Soundcloud. (Or listen below.)

Excerpt from This Episode

By Integration and Adaptation, I mean that being vegan just becomes part of your bones. What might feel like an effort when you first transition just becomes a natural, normal part of your life. Being vegan becomes effortless. You look at everything through the vegan lens and know and appreciate and don’t think twice about the fact that – yeah, when you travel to Germany, you might not eat the sausages (gladly and happily) but that there is a higher principle you’re living by. You don’t see it as a lack but rather as an opportunity to reflect your deepest values in your daily choices.

Integrating and adapting means you know and appreciate and take pride in the fact that though it might mean having to look at the label on some shoes or coats that you’re taking the time to do so not out of dogma or rules but because you want all your purchases to reflect compassion and non-violence, even while knowing that you won’t be perfect as a result.

Integrating and adapting means considering it a victory rather than a loss when we find one vegan item out of 30 on a restaurant menu. Integrating and adapting means accepting the fact that though we might appear different to everyone else around us, we’re making a difference, and sometimes in order to make a difference, you may have to do something different. But different isn’t inferior. But different isn’t superior either.

Stage 10 of what happens when you stop eating animals: integrating and adapting means being creative, flexible, humble, truthful, playful, patient, unapologetic, emotional, and fiercely unabashedly compassionate. It means you step fully into who you are and what you care about, attracting those around you with your dazzling light.

Thank you for shining your light and for allowing me to bask in it. As we transition from one calendar year to the next, may you continue to shine your light on the animals who live in the shadows, whose voices aren’t heard, whose lives end brutally and unnecessarily without anyone to grieve them.

May you shine your light on those whose compassion remains hidden even from themselves and may it reflect back on you, the source and the recipient of hope and peace and compassion. For the animals, this is Colleen Patrick-Goudreau. Thank you for listening.

Listen To This Episode