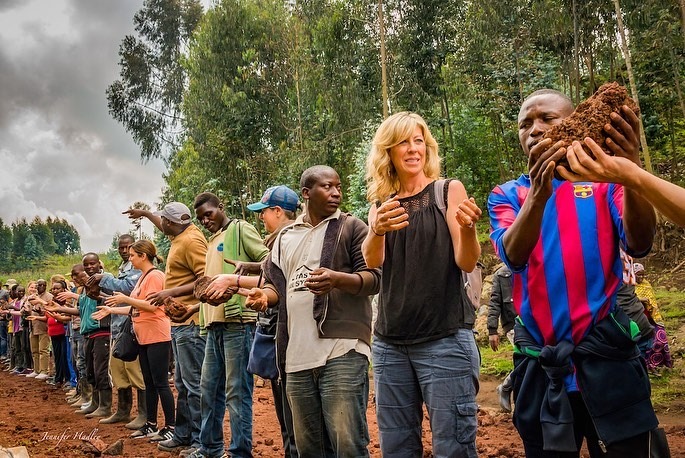 Can garbage unite our divided country?

Rwanda is considered the cleanest and greenest country in East Africa. It’s not because Rwanda employs more street sweepers, gardeners, and road crews than other countries, and it’s not (only) because of the decade-long ban on plastic bags.

It’s also because of a monthly communal ritual called Umuganda, a Kinyarwanda word that translates to “coming together in common purpose to achieve an outcome.” Military service isn’t compulsory in Rwanda but Umuganda is — for able-bodied people ages 18 to 65 — and it takes place on the last Saturday of each month.

Because expatriates and visitors are welcome to participate and because — on our recent CPG Vegan Trip to Rwanda — we happened to be there on the day of that month’s Umuganda, we arranged to visit a local village to join them build a road.

Umuganda in its current form was reintroduced in 1998 as part of the effort to rebuild the country and to nurture a shared national identity after the 1994 genocide.

As a U.S. citizen in a deeply divided country, it’s not a huge leap to draw parallels between the past divisiveness in Rwanda and the present divisiveness in my own country. If that sounds dramatic, then consider this:

Over a 3-month period in 1994 in Rwanda, this very sentiment manifested itself into a methodical massacre in which approximately 800,000 citizens were brutally killed by their fellow citizens—neighbors, co-workers, colleagues, and friends.

If Rwandans can heal, unite, and forgive after such a massive atrocity, anyone can. We have much cleaning up to do in our own country—both literally and figuratively, and we must take it seriously.

There's no manual for compassion. You just do what

WHY DO PEOPLE STOP BEING VEGAN? 🤔⁠ ⁠ It's n

We mostly tell ourselves what we want to hear. ⁠