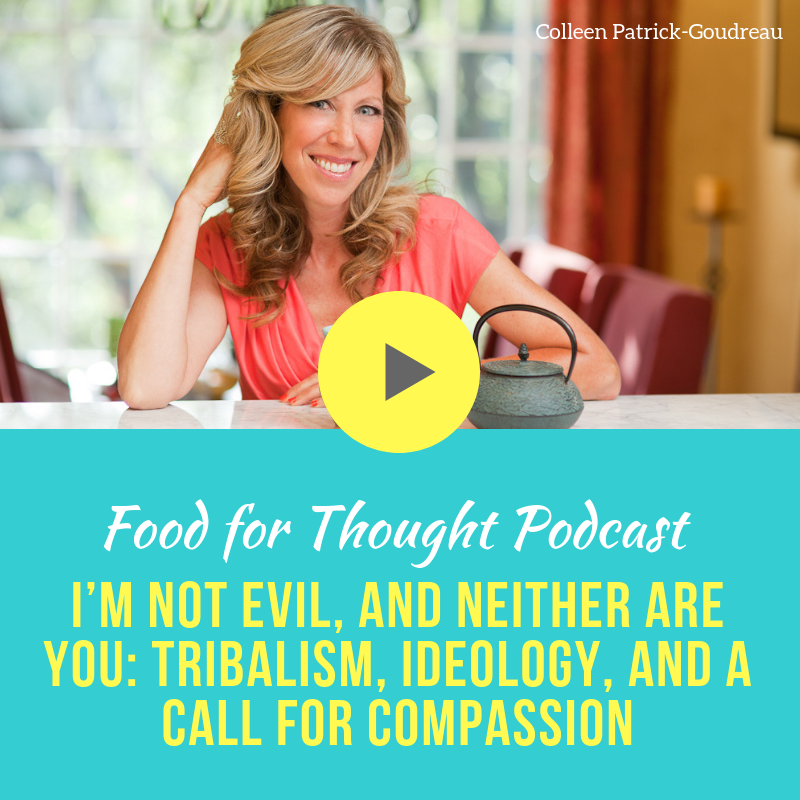 I’m Not Evil, and Neither Are You: Tribalism, Ideology, and a Call for Compassion

There’s a presumption among some vegans that if you’re vegan, you’re also liberal, socialist, atheist, feminist, intersectionalist, progressive, and leftist, that you’re pro-choice, anti-vaccine, anti-GMO’s — and that if you’re not any or all of these things, you’re unwelcome — or at least you don’t belong. Or that you’re an imposter. Or that you welcome oppression.

We are living in a time when group loyalty and identity politics are valued more than reason, critical thinking, tolerance for another point of view, and compassion. And it scares the bejesus out of me.

Today’s episode is (yet another) call for compassion.

Having a sense of belonging is vital to who we are as social creatures. In The Joyful Vegan, I write about how belongingness is one of our most fundamental needs:

Providing survival and reproductive benefits, as well as emotional, cognitive, and physical ones, our need to belong can be almost as compelling a need as food. In other words, humans have survived and thrived over these millennia because we bonded. As social animals, we evolved in small communal groups that relied on close alliances — sharing mutual goals, achieving common objectives, strengthening bonds, and enhancing feelings of self-worth and esteem.

But what happens when we share a common ethic of compassion or wellness (i.e. the desire to not eat meat, dairy, and eggs) but don’t share the same viewpoints on a range of other matters? Or even more…when we just don’t feel we need to talk about our viewpoints on other matters?

What about people who share the vegan ideal — in practice if not in theory; i.e. people who don’t eat meat, dairy, and eggs and are thus doing something to not contribute to the most egregiously violent industries on the planet — but who don’t vote the same way we do or who have different world views?

What about vegans who are religious? Or who are not opposed to genetically modified organisms or who advocate for vaccines, or who…simply question or don’t have a strong stance on one issue or another?

What do we do with the multitude of identities that make up who we are as human beings —”vegan” being just one of them?

I ask these questions, because there’s a presumption among some vegans that if you’re vegan, you’re also liberal, socialist, atheist, feminist, intersectionalist, progressive, and leftist; that you’re pro-choice, anti-vaccine, anti-GMO’s — and that if you’re not any or all of these things and everything that they entail, you’re unwelcome — or at least you don’t belong.

Or that you’re an imposter. Or that you welcome oppression.

Vegans can’t kick people out of “the club,” because there is no homogenous club, but they can deny people legitimacy and identity.

Vegan ideologues decry the use of the label “vegan” for anyone who doesn’t tick all the boxes of what they say vegan means (and now vegan is supposed to mean all of these other things other than just not contributing to animal exploitation), and they call anyone who doesn’t submit to their interpretation “fake vegans.”

It’s a kind of rhetorical excommunication.

I’ve heard from a number of vegan men and women who feel there is no place for them in the vegan community because they don’t fit into any of the above categories — or who don’t want to be part of a community that judges and attacks them because of their other identities.

And so, as a result, most of them — not all, but most — just throw the baby out with the bathwater and would rather not be vegan. If people feel less accepted by other vegans who profess to be kind and compassionate and more accepted by non-vegans who don’t judge their every move, they will naturally gravitate to people who make them feel good.

No, it’s not because they lack moral rectitude; it’s because ….as the research on belongingness shows…belongingness isn’t satisfied simply by virtue of affiliation; it’s satisfied when we form and maintain positive, stable, supportive relationships.

Am I saying it’s the fault of judgmental vegans that people become ex-vegans? Let’s just say people deal with enough pressure living in a non-vegan world, so it certainly doesn’t help when members of a community with whom there is a shared value and expectation of compassion add even more strain.

Nobody likes to feel judged.  In other words, it’s not enough to be a vegan among vegans; we need to feel accepted and secure as part of that group, as well.

Listen to This Episode

Eggless Meringue Cookies! A chorus of yellow and v

🐈MICHIKO HAS BEEN SHELTERING IN PLACE FOR 9 YEA

We become what we focus on.

ON EGGS AND EASTER: What better way to celebrate a